Seollal is typically a family holiday. The three-day holiday is used by many to return to their hometowns to visit their parents and other relatives

Sebeh (worship elders) is a traditionally observed activity on Seollal, and is a ritual of filial piety. Dressed in traditional clothing, children wish their elders (grandparents, aunts and uncles, parents) a happy new year by performing a deep traditional bow (rites with more than one bow involved are usually for the deceased) and the words saehae bok mani badeuseyo, or “Please receive good fortune for the New Year”. Elders typically reward this gesture by giving their children new year’s money, or “pocket money”. 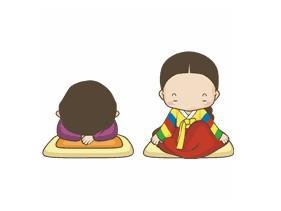 I DO NOT OWN THIS PICTURE OR DOING ANY ADVERTISEMENT.

I DO NOT OWN THIS PICTURE OR DOING ANY ADVERTISEMENT

Tteokguk (soup with sliced rice cakes) is a traditional Korean food that is customarily eaten for the New Year. According to Korean age reckoning, the Korean New Year is similar to a birthday for Koreans, and eating tteokguk is part of the birthday celebration. Once you finish eating your tteokguk, you are one year older.

On Korean New Year day, people prepare a lot of food and spend much of the day with family.

I DO NOT OWN THIS PICTURE OR DOING ANY ADVERTISEMENT.

Jeon, sometimes called buchimgae, is a traditional Korean dish especially eaten on the Korean New Year’s Day. As a type of a pancake, one would expect it to be sliced with a knife. However, the jeon is ripped apart with chopsticks in the belief of making it taste better.

THIS BLOG IS USED FOR EDUCATIONAL PURPOSE ONLY.